Home Projects Electronics A LED tree that you can blow out

A LED tree that you can blow out 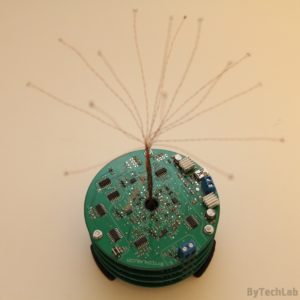 A few words of introduction: (maybe not a few, quite a lot actually 😀 )

You must be wondering why I’ve done this fancy and unusual project. The answer is pretty straightforward:  I wanted to make “one of a kind” gift for my friend. Just something you can’t buy in a store , you know what I mean :).

The LED tree from the electronics side is almost 100% analog, you know capacitors transistors and other stuff like that. Because of that I think its safe to say that it is the most complicated blinking LED circuit in the whole world (probably the biggest overkill I’ve ever done 😀 ). But you know, certainly this tree wouldn’t be so fun to build if I’ve used a μC.

The whole tree consists of a 16 individual twisted copper wire branches with LED,s on its ends, each of these LED,s can be blown out separately. I’ve also added a nice fade in effect (LED,s turn on quite slowly after being blown out). But wait, there’s even more: I’ve implemented a simple game! If you blow out all LED,s before they light up again, the PCB’s will start glowing red indicating that you were fast enough :D. It’s not that simple to blow out them all at once as I thought it will be 😛 . If you want to try again, you can reset it with a button.

Anyway, down below in this short post I will show you how the whole thing was designed, how it looks and how it works:

Some photos of a finished tree 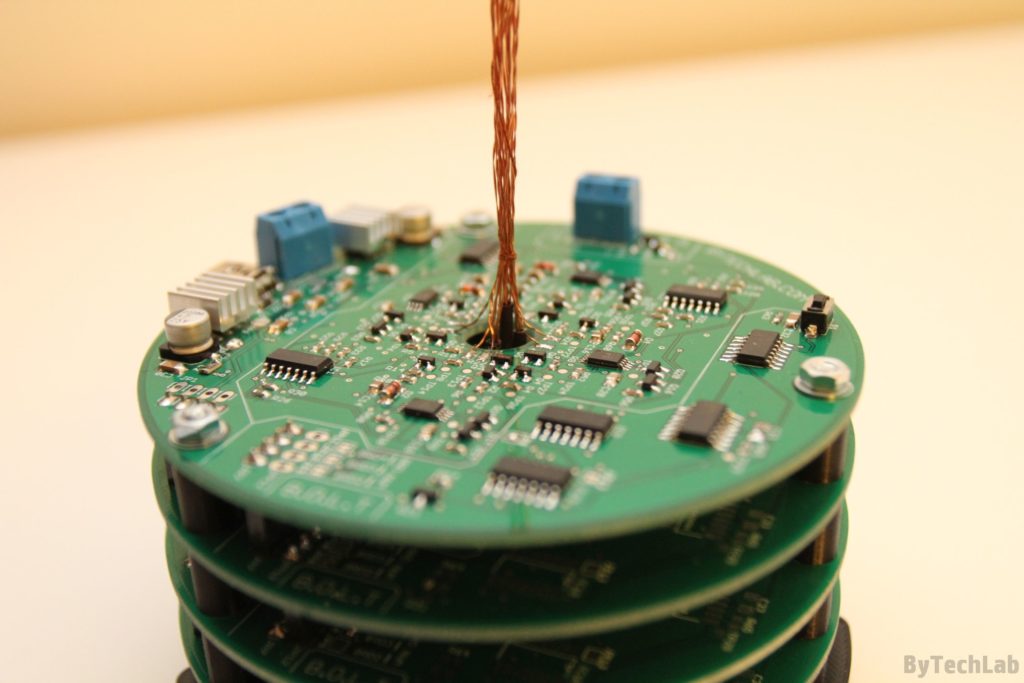 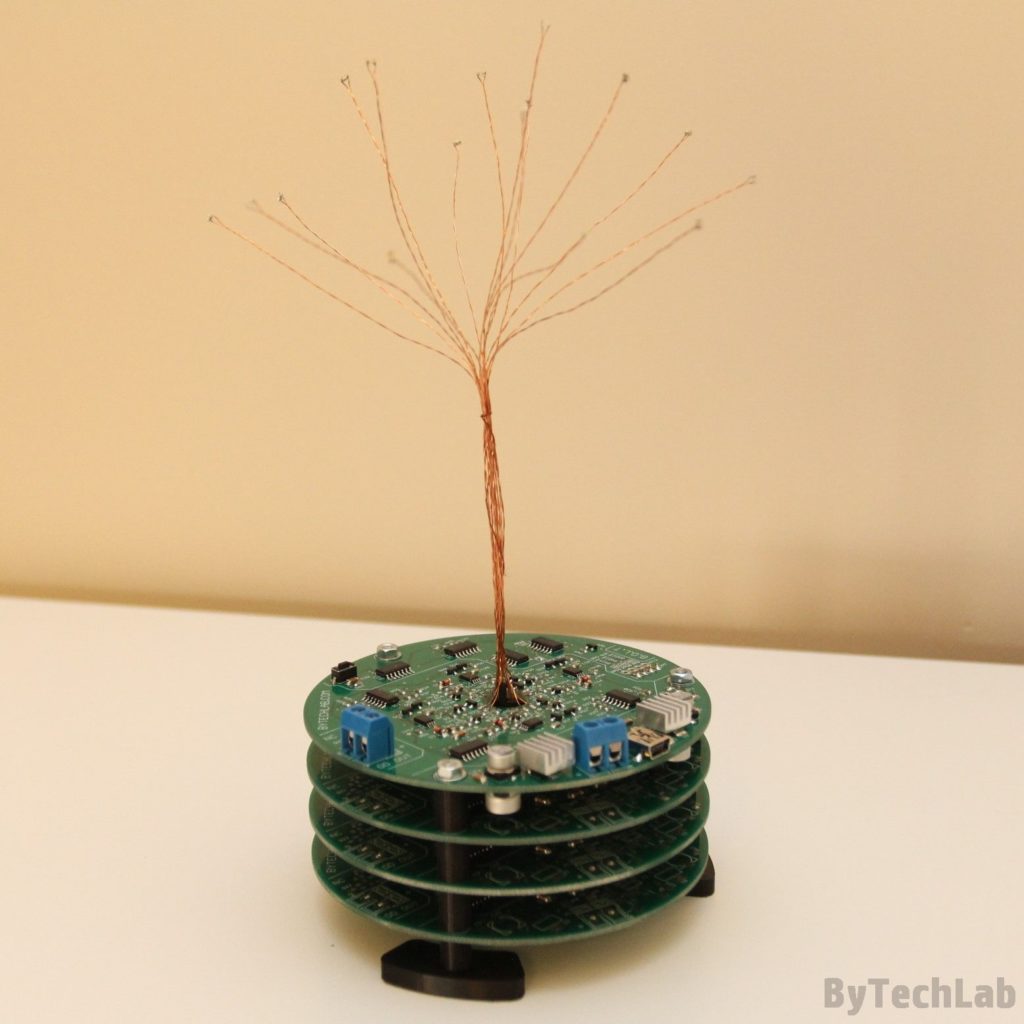 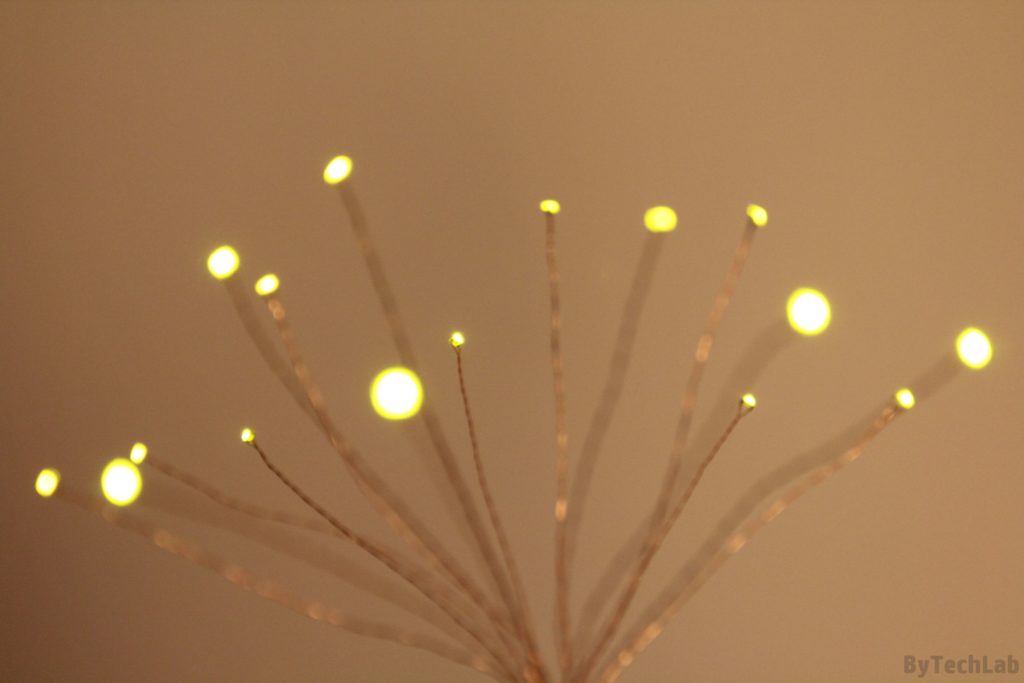 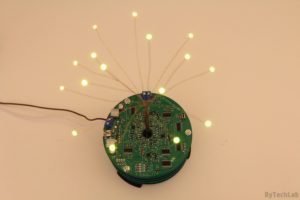 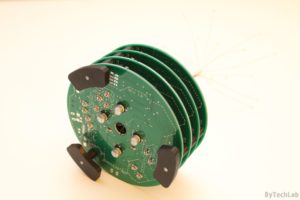 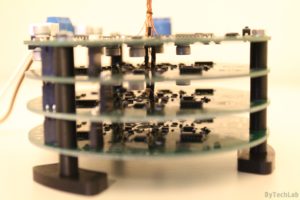 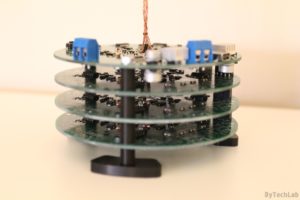 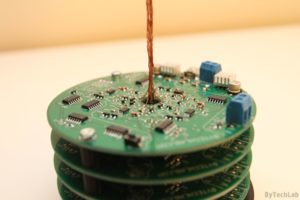 Forgive me the poor quality of the vid. [ It has been recorded with a brick 😀 ] .

Schematics & how does it work

Schematic of each LED control block is relatively the same as in the LED you can blow out like a candle project. But there are some important changes to it.

For example: I’ve used less components to build each LED control block ,there is a special voltage reference just to improve overall stability of the whole circuit , PSU was redesigned to reduce noise and voltage spikes (certainly we don’t want that, when working with analog signals), I’ve also added bypass caps in some places and more…..

To implement a simple game which I’ve described above, I needed to add some logic gates and one JK flip-flop. You can take a look at it down below: 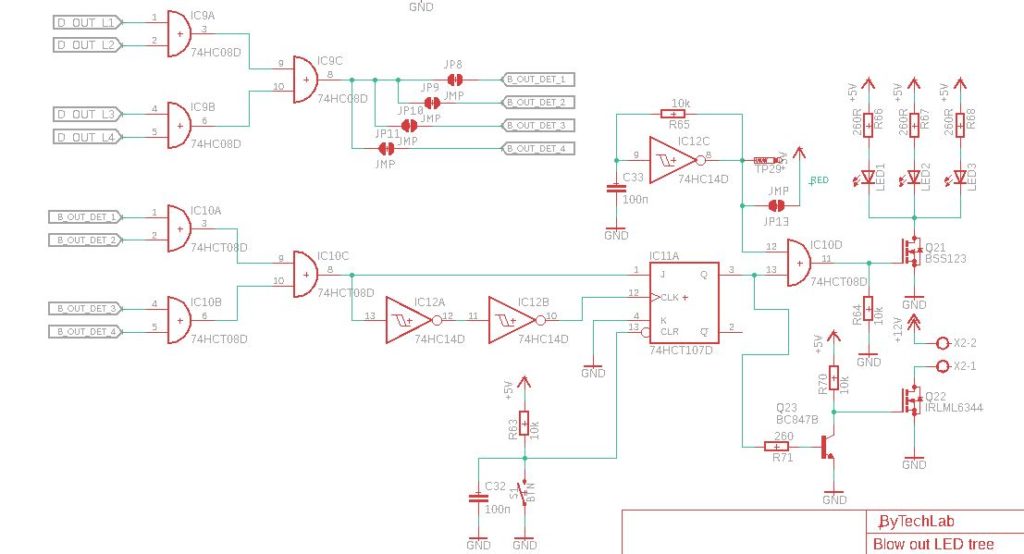 The whole PCB was designed in Autodesk Eagle software. It took me about one or two days to draw the schematic and design the PCB itself . I’m quite happy with this layout, all small components are tightly packed on the PCB.

The PCB doesn’t have to handle high current,voltages or frequencies, so I didn’t have to care about: copper thickness ,traces width and their shape, substrate type and other stuff like that.
The PCB has a diameter of 100 mm (max. size before manufacturing price starts to grow exponentially 😀 ).

I’ve ordered 5 of these from PCBway for 5$ + shipping. The overall quality is quite impressive for this price. The only thing I’ve noticed is that the silkscreen is slightly offset from the pads.

Most of the passive components are in 0603 package. 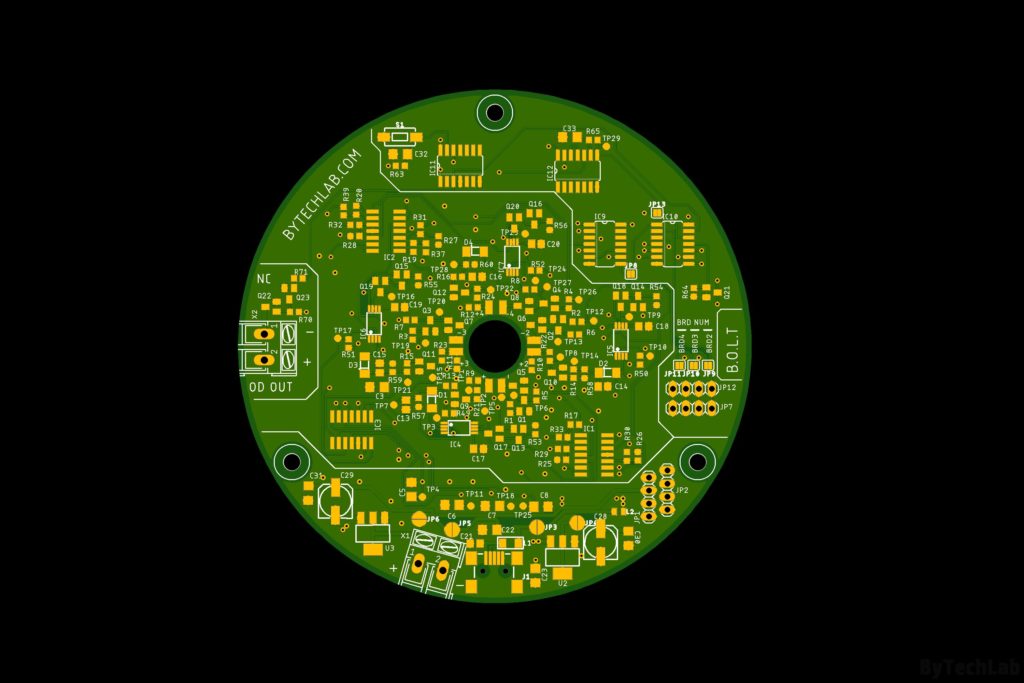 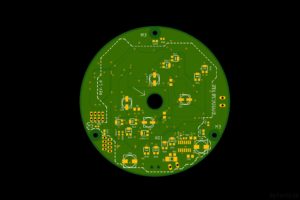 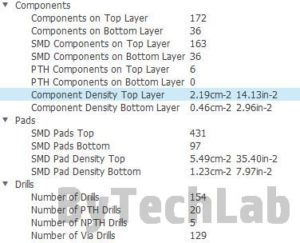 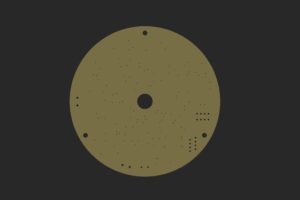 Soldering the PCB, adjustments and testing

I’ve soldered all of the components by hand , because of that it took me almost a eternity to solder them all …

After putting everything together I just needed to adjust some potentiometers to make it work. It was a fairly straightforward process , really nothing special. 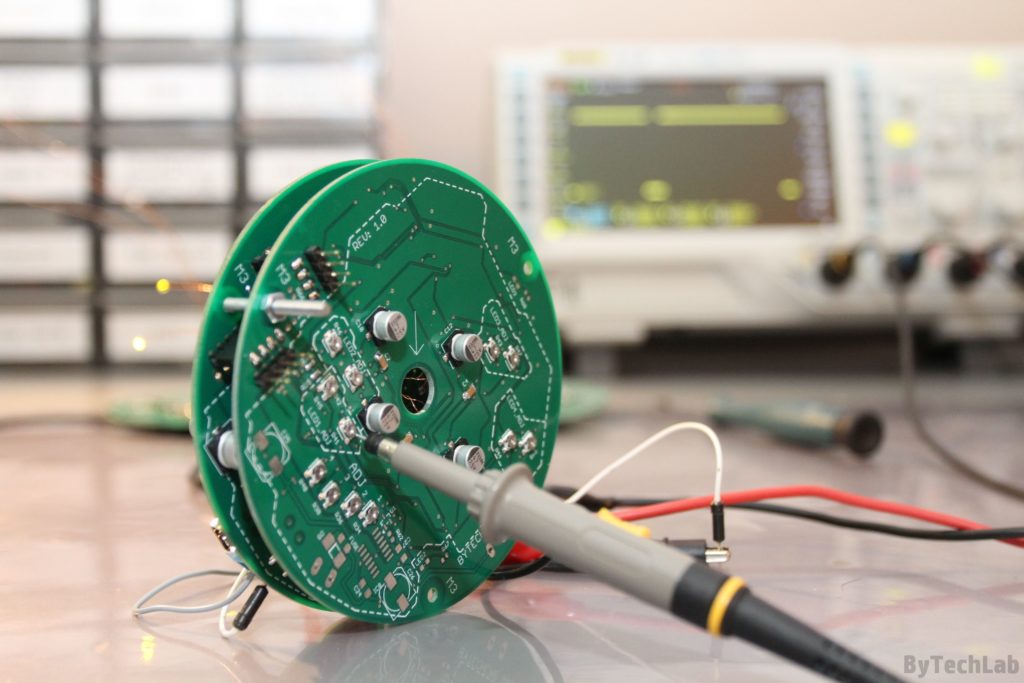 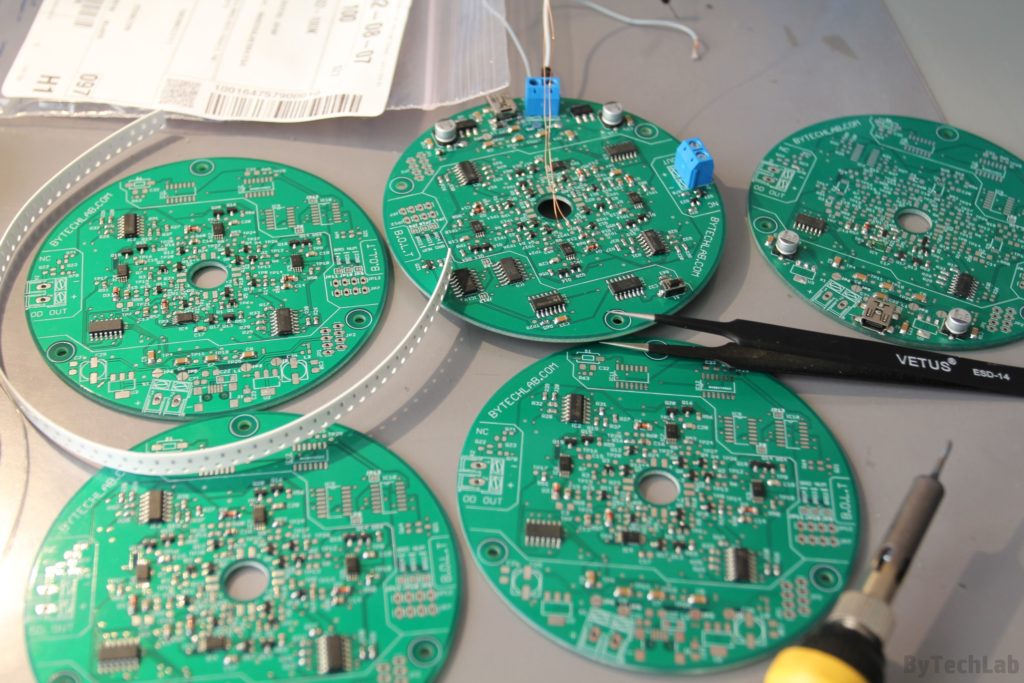 Soldering components on a PCB 3 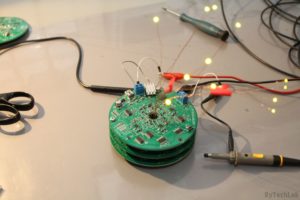 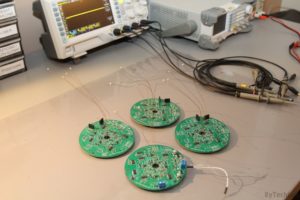 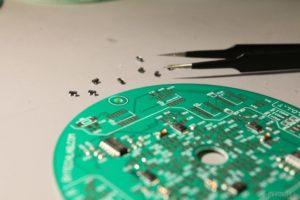 Soldering components on a PCB 2 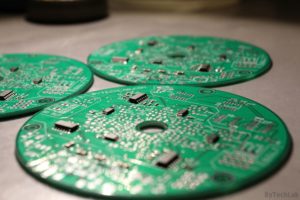 Soldering components on a PCB 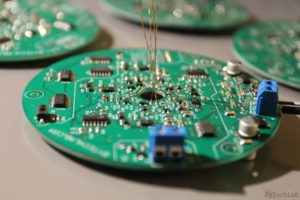 Soldering components on a PCB 4 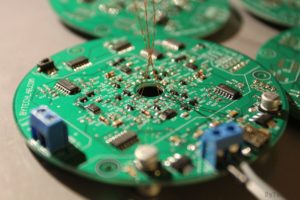 Soldering components on a PCB 5 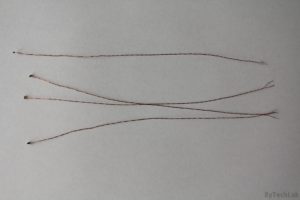 I just love to look at my printer when its doing its work, it’s so addicting…. 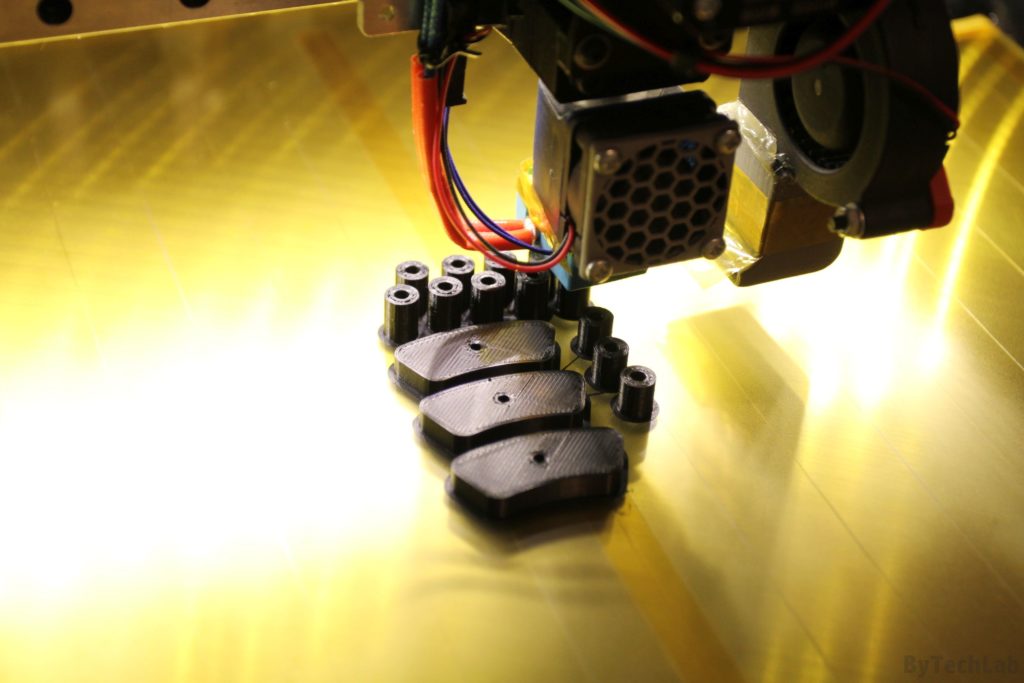 I hope you liked it, maybe I’ve inspired you to make something creative.